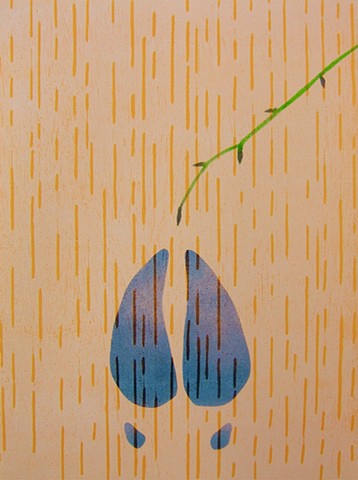 (L. notation a marking, etymology, fr. notare to mark.) 1. Etymological explanation or denotation. 2. a. Act of noting: observation; a taking note. b. An annotation; a note. 3. A mark or indication. 4. Act, process, or method of representing by a system or set of marks, signs, figures, or characters: any system of characters, symbols, or abbreviated expressions used in an art or science, to express technical facts, quantities, etc..

This print symbolizes the flora and fauna existent in New Hampshire and honors the rich contribution of these natural resources to the history of the region. It’s a snippet of visual information: a moose track, patterning from the interior bark of a white birch tree and a twig from the white birch. The Moose (Alces alces) is the largest of the deer species and can be found in the northern regions of North America, Europe and Asia. Moose is an Algonquian term for “eater of twigs”. This magnificent animal was essential for survival and livelihood. All of the Moose was utilized: meat for food, hide for clothing and pouches, bones for tools. Prior to European settlement, Moose were more common than deer in New Hampshire, but by the mid-1800’s, there were fewer than 15 in the state. Today, due to conservation practices, the Moose have increased in numbers since the mid-1800's, but are continued to be threatened due to climate change and the proliferation of winter ticks. The White Birch Tree (Betula papyrifera) is the official state tree and native of New Hampshire. It is also known as Canoe Birch or Paper Birch. Native Americans of the Eastern Woodlands made extensive use of the white birch. All parts of this tree had practical uses pertaining to travel, fuel, shelter, tools and sustenance. This includes canoes, lodges and wigwams, moose calls for hunting, storage containers, makuks, dishes and bowls for carrying berries, water, wild rice etc., Birch bark is quick to burn and was used as a fire starter, the sap tapped for drinking and medicinal purposes. Scrolls of birch bark were inscribed with pictographic writing and handed down from generation to generation.